Can You Just Do This One Thing For Me?

One of the first posts I wrote here was about the power of practicing reciprocity. From an influence perspective, reciprocity is the act of giving someone something with no expectation of getting something back. The gift builds up an internal debt within the other person that they feel compelled to repay. Robert Cialdini included reciprocity as one of his key principles of influence in his classic book "Influence: The Science of Persuasion."

The focus with reciprocity is usually on how by initiating an 'exchange', we can use the internal debt in the other person to help us when we want to influence them.  An alternate perspective comes from Benjamin Franklin via Jordan Peterson's book "12 Rules for Life" and is in the photo below.

Franklin's technique involved inviting the reciprocal debt by asking for something manageable first. Initiating reciprocal exchanges in this way does two things:

Both techniques can be really useful when trying to build a network of influence, although Franklin's technique can only really be employed early in a relationship and only if the request can be small. Make the request too big and other person is more likely to resist. Reciprocity can continue to be used throughout relationships and remains for me, one of the most powerful ways to build up a surplus in your influence bank account.

"He that has once done you a kindness will be more ready to do you another than he whom you yourself have obliged." 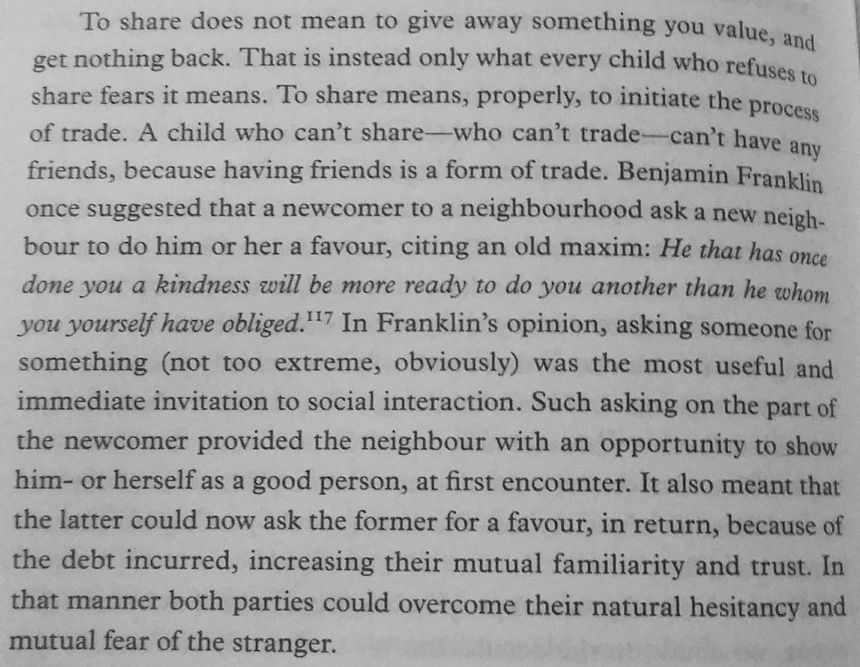 Rule 7 from 12 Rules for Life: Pursue what is meaningful (not what is expedient). Illustration by @EthanVanSciver Book available from many sellers at: https://t.co/HO7t9CDrZx pic.twitter.com/DC7sscYn5N