There is a rather nice infographic in the attached article that shows the revenue split for Apple, Alphabet, Microsoft, Amazon, and Facebook.

I have 3 key takeaways from this:

1. Alphabet and Facebook make almost all of their money from advertising. The digital advertising space must be reaching saturation with these two players duopolising the market. With vast datasets on a worldwide audience, Alphabet and Facebook can be sniper-like with their targeted advertising - I can't honestly see how any other parties could stop their domination. I expect there could be some antitrust penalties coming soon.

2. Software and Cloud are not the money-spinners I had previously thought. I was personally surprised at how small a contribution these two entities played across the Big 5's collective revenue. Particularly that Windows only accounts for 9% of Microsoft's revenue (when six years ago it made up around a quarter).

3. Facebook and Amazon's revenue sources are incredibly undiversified. Microsoft, on the other hand, is extremely diverse by comparison. For investors, a lack of diversity in revenue composition sounds pretty risky, particularly in tech where trends move very quickly; leaving revenue streams to dry up as quick as you can say Windows Phone.

Together, they are worth $2.9 trillion in market capitalization – and they combined in FY2016 for revenues of $555 billion with a $94 billion bottom line. 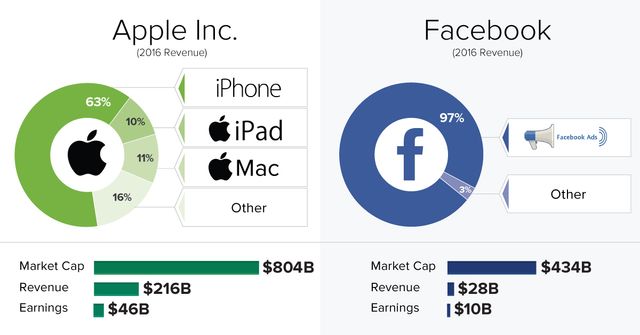 The Revenue Streams of the Five Largest Tech Companies https://t.co/9qJhibNXbR via @Visualcap

This analysis of the largest tech companies' revenue streams is fascinating. Crazy how diverse @Microsoft is compared to @amazon, @Apple, @Google, and @facebook. https://t.co/6wV2WQwZwQ

Creating content doesn't have to be an Atlantic effort.
Charles Cousins

Join our subscribers and get insights like these once a week