What do clients really want that legal tech can solve?

Rachel Roberts,  Rosemary Martin, Sam Moore and Sean Thomas all took part in a panel discussion on Friday at the legal innovators conference around legal tech and what clients really want.

It proved to be an interesting mix with two clients (Vodafone and Alphasights)  two law firms (Burges Salmon and Burness Paul) and two vendors in the form of Eigen Technologies and Apperio. It made for a pretty balanced but lively discussion.

Rachel Roberts heads up the business services unit at Burges Salmon and she was quick to state that some of the best recent projects that she has engaged with have been geared around understanding client's pain points better whilst also taking the heavy lifting away from an under-resourced in house team.  Rachel and her multi-skilled team were then able to put forward tech-driven solutions that their clients could really leverage via Burges Salmon.

Rosemary Martin of Vodafone stressed the fact that collaboration from a legal tech perspective with law firms is huge, and of course once a solution has been used then it can often be replicated in other departments.  The only down side to this and the panel all agreed, was the fact that scope creep can take place if success isn't clearly defined.

Sean Thomas of Alphasights was keen to stress the makeup of his inhouse team had an avergae age of 26.  He suggested that this was brilliant in terms of embracing the tech and digital culture and he empowered them to do so.  As a result, retention was high.  Rachel Roberts agreed that to ensure a true collaboration of inhouse teams and law firms could take place, there needed to be a good blend of skills and ages in her team.  She also highlighted that within law firms, wellbeing, working environment and flexibility were key.  Sam Moore's approach at Burness Paul to the younger generation was to 'beg borrow and steal them' once they joined the firm as he felt in some respects he and his innovation team offered a safer haven for feedback as opposed the fee earner arena.

The empowering of the younger generation both inhouse and from a law firms perspective seems like a no brainer especially when you take into account research like the recent Olive communications survey of 1,000 consumers and 500 law firms here.  66% of law firms stated that they were worried about lagging behind the tech curve would impact productivity, billable hours and client response rates.  65% of the millneials surveyed stated that they wanted to be communciated digitally rather than in person.  To combat this, embracing the tech savvy younger generation makes perfect sense within inhouse and law firms.

The panel discussion concluded with both client in house teams stressing that whilst they were happy to collborate and build solutions that worked with law firms, there should be no blurring of tech lines when it came to pureplay vendors.  'We look for tech from providers, not law firms' suggested Rosemary Martin (Vodafone) and Sean Thomas (Alphasights) nodded in approval. 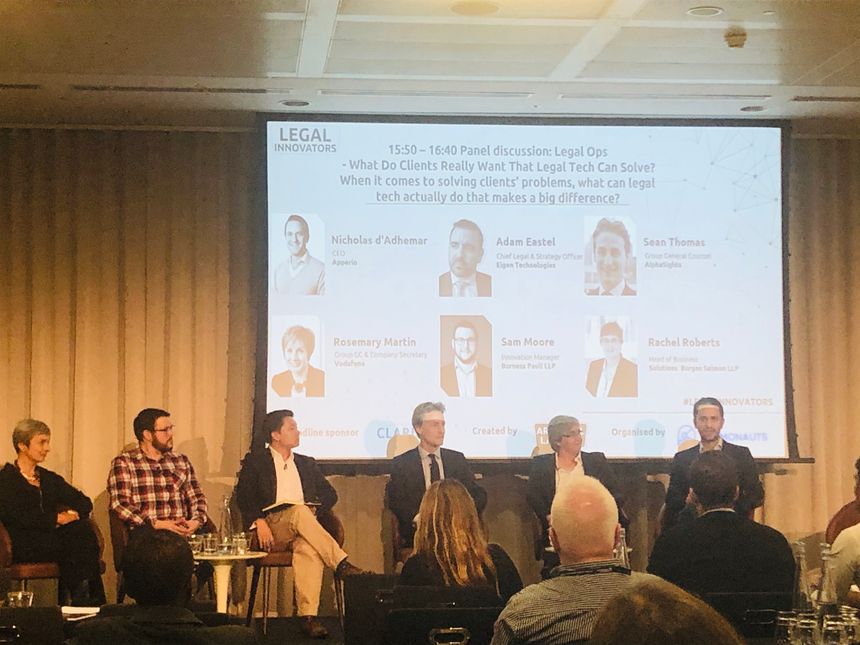 #legalinnovators19 Panel discussion: Legal Ops - What Do Clients Really Want That Legal Tech Can Solve? Panellist explains that: ‘Service providers need to be ready for a through DD exercise on their service.’ @ArtificialLawya #AI #legaltech pic.twitter.com/FM4TCRu8is

Rachel Roberts, Head of Business Solutions is excited to be speaking at #LegalInnovators19 today, an event by @ArtificialLawya. This is the first time this event has run and the main topic of conversation is around how #innovation is changing the delivery of #legalservices pic.twitter.com/t7ut73JJbp