I was treated to the Fintech Collectives 7th annual meeting of CEOs and LPs in Brooklyn, New York this afternoon. Not only are the Fintech Collective a very good VC they also appear to know how to run events! With a stellar line up, proceedings started with Professor Kevin Fong OBE giving his insight into Apollo 11 and specifically relating it to high performance organisations, such as NASA or the businesses represented in the room!

A key takeaway for me was how the average age of those in mission control was 27 during Apollo 11. Stop and think about that, imagine an organisation today that has that average age. The secret to this was not so much in the hiring as Kevin explained but the on-boarding.

This meant that Gene Kranz, Chief Flight Director, during the mission had to rely on his young, inexperienced team to provide critical, real time, real consequence answers without second guessing them.

There is a great example of this that Kevin brings to life in his podcast (download here) in the final 120 seconds of the landing.

So how were these 20 something engineers on boarded to be able to respond? Kevin answered this at the end (take note of this if you are in management or hiring!).

On hiring, the recruits were exposed to increasing levels of responsibility. If they accepted it they were given more. Those that continued to excel were chosen for the critical roles in the mission. As Kevin explained you need to expose your team to real time, real risks with real consequences.

Finally for the management reading this, make sure your entire team are in the same risk bucket. The day the team walked into mission control for Apollo 11, Kranz let the whole team know that they all walked in together and consequences would be the same for all.

✅Delegated authority, expertise ✅Exposure of team to real time, risk and consequence  ✅Distributed leadership✅Putting your entire team in the same risk bucket ✅Exposure of employees to increasing levels of risk 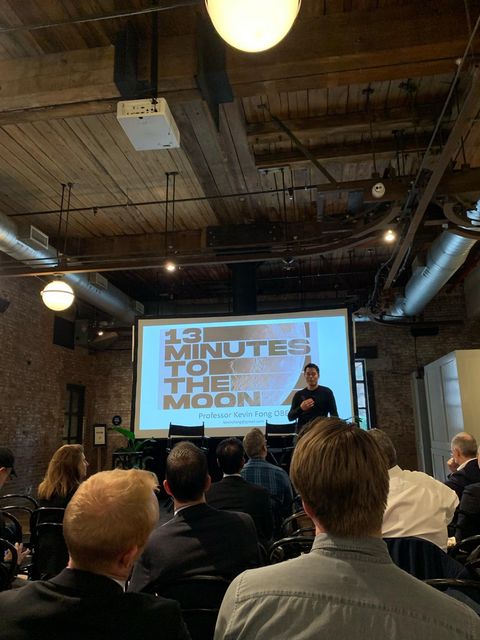 It would be remiss of me not to re-plug @Kevin_Fong’s totally gripping “13 Minutes To The Moon” podcast from earlier this year (on the occasion of the 50th anniversary of the first moon landing). All episodes still available. Highly recommended. https://t.co/8xWmMo993i

Thank you Sam Bobley, CEO of @ocrolus, and Andrew Jamison, CEO of @PayWithExtend, for joining me on-stage at our LP + CEO summit to discuss the combination of humans + machines. @fintech_io #fintech pic.twitter.com/laE5l641e7

“If you are small and entrepreneurial there has never been a better time to build a business. There’s a huge opportunity to build your story into everything you do from@the beginning. @RosemarieRyan at the #FinTechCollective conference pic.twitter.com/T4FUm9jAbK

By Will Eke
By Eugene McCormick
By Alex Reid