After possibly the most controversial, inspiring, and downright emotionally stressful affair... Cricket is actually coming home... a showcase for the sport which will certainly go down in the history books as one of the greatest sporting spectacles ever!

Fought between England and New Zealand, Sunday's Cricket World Cup Final was riddled with big moments which completely swung the balance of momentum in favour of one team to the next. Whilst my heart-rate is still settling back to normal, I have shared a few thoughts on the England's campaign and how you can apply these learnings to your business.

1. Tailor training and Professional Development to focus on your individuals - this is more effective than a 'One-Size Fits All' Approach

The match was so evenly poised that after the regulation 50 overs, a 'Super Over' was required to try and separate the contestants.

With the Black Caps needing 2 runs from the final ball to secure the championship, Martin Guptill hits toward the boundary and races back for the all-important second run... only he is denied by a superb piece of fielding from Jason Roy.

Reading into England's preparation for the World Cup (see the quote below) when it comes to fielding, each player has tailored training to develop the skills specifically relevant to their role in the outfield.

Having bespoke development programmes for your employees will help them progress, harness their strengths, and step up with calm and confidence when the big moments arise. Certainly something Jason Roy applied to England's benefit during the final ball of the match.

2. Leverage your Experts at the right moments

There is much to be said about the tactical performances of both teams' captains. Both Morgan and Williamson used their experience to brilliant effect over the last 2 months.

Importantly, they trusted their team members to execute when given the opportunity. This extends to Joffrey Archer - England's most junior bowler - being given the responsibility to steer the team home with the Super Over.

Think about how you can leverage your team's expertise to improve your positioning and relationships across your accounts. The skill here is leaning on the right people at the right time to get them in front of a client/prospect. Doing this effectively will change the perception of your firm in the eyes of your client.

3. Identify which of your People bring out the best in each other

There is a skill in identifying the 'right' individuals who will work together most effectively in a team. Getting the right people dynamic in place for a bid or project delivery, can be the difference between success and failure.

There was much to be said about Roy's performances with the bat over the World Cup campaign. More interesting, however, was the performance of his opening partner, Bairstow, when they played together. Whilst they weren't able to replicate their outstanding form for the final, they were fantastic in the tournament overall and have gone down as the most successful ODI opening pairing of all-time.

4. Learn from your Failures and constantly Improve

After cruising past Australia in the semi-final, England's captain (Morgan) and coach (Bayliss) were wary of letting complacency set in. Morgan was adamant that the team learn from their sobering loss to Pakistan in the semi-final of the 2017 Champions Trophy, a fixture that they walked into as the heavy favourites.

Another prime example is England's all-rounder, Ben Stokes, who was revered for his performances with the bat - especially in the final! Notably, however, he was the only bowler to complete more than thirty overs throughout the competition without being hit for a six. This comes three years on from the T20 final where England lost after Stokes was hit for four sixes in a row during the ultimate over. It is clear Stokes has bounced back and used the experience as a learning process.

See failures as an opportunity to learn.

Ultimately, there are countless variables that can influence the outcome of the tournament, the same as in a business context. All that you can do is work on the things you can control, and using your experience prioritise the factors you think will have the greatest impact. Whilst you make your own luck, I do also appreciate that England had an absurd abundance of it at the weekend. Hard luck to the Black Caps who were fantastic sports and I have no doubt they will bounce back.

Fielding sessions for most teams are done as a group. Players take high catches, slip catches and pick-up-and-throws. England’s is tailored to the individual and their roles in the team. For four years Jason Roy has been a boundary rider, trained for hours to attack the ball, pick up and throw in one movement. When Martin Guptill hit him on the boundary with two needed to win, Roy remembered those hours of training, movements that had been honed that morning before play with one last refresher with fielding coach Carl Hopkinson. Roy did what came naturally under the most severe pressure. He attacked the ball, threw in one movement and England were World Cup winners. 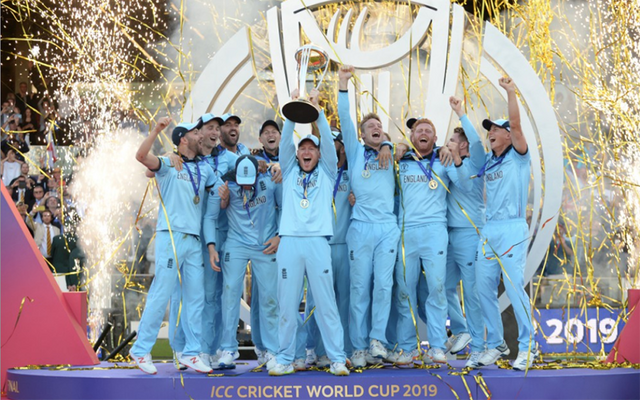 Rollercoaster of emotion, that’s why we love this sport 🏏 @englandcricket that will go down as a classic, congratulations 👍🏽 #CWC19 #ENGvNZ pic.twitter.com/d9xfi4VsxD

"No one really deserved to lose but that is the game."

How cutting short celebrations after Australia win laid the groundwork for sensational final victory | The inside story of how England won the Cricket World Cup, by @NHoultCricket https://t.co/gdLr2UnYlb

This picture. The Freddie Flintoff/Brett Lee moment 14 years on. Sums up everything we love about sport. #cwc19 @englandcricket pic.twitter.com/xoCTZfqE5h

Differentiating yourself in a digital world: Why you need to tell YOUR story
Freddy Dobinson

Avoiding Obscurity: Why to Brand Yourself Like a Marvel Avenger
Freddy Dobinson

You've got an event coming up... now what?
Freddy Dobinson
Recent posts from Expert To Expert Marketing